Catching up on the blog-monster.....

So once again it has been some time since my last entry, I felt why break the trend and start with anything less than another apology for my absence?

As the blog-monster mentioned, it has been busy times in the world of Tin Shed for the past 3 months and as 2012 draws to a close and we begin to pack up our tools and nurse our bruised limbs its time to reflect on successful year. You know its been a long one when you discuss projects that took place in march and describe them as 'last year', its almost as if the winter/spring season lingers in this strange space-time continuum.

It has however been a tough year for us all in our personal lives, we have all moved house, gained/lost partners and generally run ourselves into the ground emotionally (once or twice) but it can only be seen as productivity and material for messy, relationship, backlash writing channeled into the medium of interpretive dance.

So what is 2013 looking like for Tin Shed? Well as it happens, pretty darn busy already. Sticking with the trend we are touring Of Mice and Men from Feb-March in Schools and venues, a few cast changes next year to be announced at a later stage. In May we embark on our venue tour with Dr Frankensteins Travelling Freakshow venues will be put up on the website shortly. There are talks at the moment of it going to Ed Fringe but this is TBC after much organisation and hair pulling.
We are then very much looking forward to putting Dr Frank to bed for a while and getting our devising boots on once again and scratching a new idea that has been brewing in the Tin Shed slow cooker for some time now, so watch this space on that one.

Well i hope everyone is getting their little christmas heads on and are ready for the festive season!

The aftermath and the birth of something new.

'The Meeting' is adjourned.

What a project. I won't lie and say I didn't go in to the project with a certain amount of scepticism.

The project seemed risky. To make a piece of theatre in 2 weeks using a hefty amount of research gathered by Gareth Clark and Merega Pulser (Mr & Mrs Clark), voices from numerous pockets of community in Newport. The purpose of the project was to make something profound. Something that would change the way people think, would challenge there 99% perceptions, something that would, in it's own way, "regenerate" Newport. I've lived in newport for almost 6 years. I wasn't sure about standing on a soap box and telling people born and bred about their town but I was shocked by the response.

The people who came spanned a broad spectrum. From 8 year olds to 80 year olds, men and women from deferent cultures, sceptics and believers. We performed over 10 times to audiences ranging from 4 to 22 and the experience harboured a lot more than I first expected it to and for me. People left feeling invigorated, optimistic and hopefully proud about their town. Having had their voices heard and transformed into performance must be an awesome thing. It must make people appreciate the spent by other people pondering over their words, let alone have an appreciation for the delivery of it. It was an amazing experience as a performer, I hope it was as much of an experience for the audience members.

The amount of people who came was incredible! URBAN was thriving and alive every night of the week. The gallery exhibition (beautifully curated by Steph and full of amazing Newport-Scentiric art) was visited by 76 people in 1 day! We sold out every single evening performance, Newport felt alive again! The people who gave their time to come are owed a lot for the over all impact of the show, and they prodded my scepticism back into it's jar.

Thank you so much to anyone who came.

It feels like something big is going to happen in Newport... And on that note...

WE HAVE A HUMUNGOUS SPACE FOR ARTISTS!

Merel Prescott chair of Art-Topsy (An artistic collective from Newport) working with us and especially Val from Healthy Planet has managed to gain us and other artists free space.

MFI closed down in Newport in 2011. Since then the building has been derelict. The building is enormous and is full of valuable space. 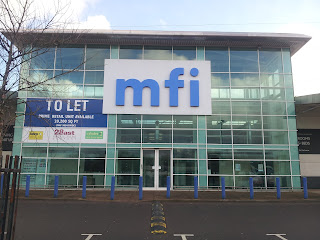 Art-Topsy and Tin Shed Theatre Co. will be moving in together this December and beginning to plan and explore this spaces true potential. For this to happen and the immediate community, or local artist/company to not benefit would be such a butter. So... Yeah... It's pretty awesome.

We're hoping to work with other theatre companies, community groups and young people in the local area offering free drama classes and workshops.

What I really want to do is plan a massive zombie apocalypse audience experience... Interested? 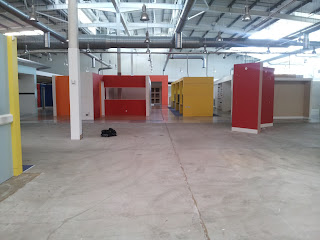 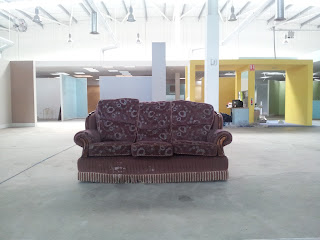 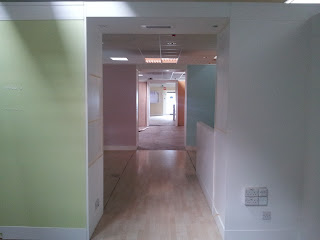 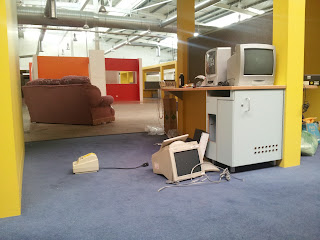 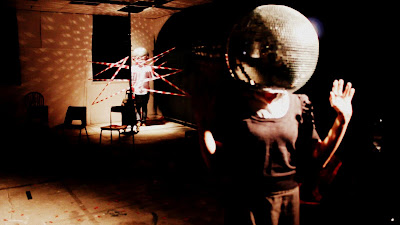 'Oh I see... You're the type of people who say "nothing happens in Newport" aren't you? This is the ending you want...'

Our cynical, self depreciating, depressed stand up comic begins to tell bad jokes about Newport; "I went home to my wife, she said "I'm home sick" I said, "You are home" she said, "I know and I'm sick of it...""

Luckily that's when a group of Morris Dancers rudely interrupt our cynical raconteur and begin to high-jack the ending (with an audience members help).

If you don't know what I'm talking about, you haven't been to 'The Meeting'. We've had audiences of 20 people almost every night this week and their feedback has been that they laughed, they felt immersed, they felt inspired and involved in something, but interestingly they felt a certain amount of guilt. Not a really bad guilt, but the kind of guilt one might feel when their hamster dies and they regret not taking it out of the cage more. A kind of guilt that allows people to accept that perhaps they've been judging Newport by it's cover for too many years. The kind of guilt that makes you realise by saying "I'm not going out tonight, nothings happening" that you are probably the route-cause of that problem.

This week people have been invited to talk with us, watch with us, make with us and be taken on a journey by us (literally). These people know that more goes on in Newport than meets the eye. They know about the secret cinema club, they know about a submarine being built in John Frost Sq, they know about Post Port, Barnabas Arts House, U.R.B.A.N, Robins Lane, CineBakery, The Riverfront and all Newport's other cultural offerings. They know there is an array of amazing buildings, vibrant bars, a beautiful night life, an exciting arts scene, and numerous pockets of untapped culture and recreation... The problem is there's only about 70 of "THEM", and perhaps that's the problem... Not enough people know about these things. Are they poorly advertised? Or does no one care about whats happening? Do they assume it's not?

It looks like there are some really exciting opportunities arising in Newport. We just need a platform to scream it from.

Either way, for those who have been to see 'The Meeting', whether they loved it or hated it, whether it moved them or left them cold, whether it converted or solidified their hatred of Newport, it is here. It will be here for two more nights only.

Don't miss your chance to say exactly what you want.

What is The Meeting?!

I've lived in Newport since 2005 and back then I remember feeling a great sense of comfort from the city. Having lived in a small village all my life I found the closeness of people and the sense of community welcoming and warm. Although I will admit, my (perhaps) rose tinted glasses have dissolved a little, they have become eroded by pessimistic notions and peoples overall attitude towards Newport.

Tin Shed Theatre Co. has lived in Newport since 2010 (officially) although the three of us have been making work here for almost 8 years now. We've been criticised by Londoner's, invited to make a new home for ourselves in Bristol and are constantly left a bowl of food by Cardiff, but for some reason we've become attached to our Newport. In these (as my Grandfather might say) "Harsh Economic Times" it might seem stupid to stay in a city which isn't only lacking in interest but also in funding opportunities, an established arts scene, and more importantly, a true identity. But if we don't stay, who will? Where's the fun in waltzing into an already established artistic centre, surely there's far more exploration, spontaneity, meaning and adventure in creating our own... Right?

The good news is we are not alone. Since starting in Newport we have met many creatively-minded people all striving to make Newport a place where exciting live entertainment can happen. Two of these people are Gareth Clark and Merega Palser (AKA - Mr & Mrs Clark). The Meeting is our first collaboration together.

Along with Lauren Brown, Peter Farago, some friends, some artists and the words of the community we have created an immersive exploratorium of ideas, sketches, concepts and formats which have actually re-introduced all of us to the reasons why we love Newport and have decided to create work here.

The Meeting is happening in Newport from the 16-22 of November at the U.R.B.A.N Arts Space in John Frost Square.

Newport, weather your love it or hate it you want want to miss The Meeting.
No comments:
Newer Posts Older Posts Home
Subscribe to: Posts (Atom)