Returneth from Ed and Prep for Reading & Leeds Festival. 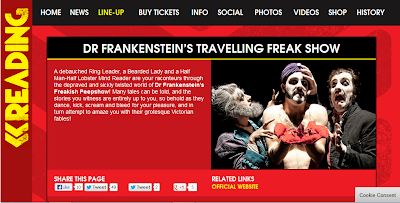 Edinburgh was phenomenal! It really was, the show went down a storm and our box office, our critics and our audiences would suggest it was a total success! So we couldn't be much happier than that.


Here's a tiny amount of the photo's we took for your viewing pleasure:

Since getting back, things have been more hectic than they were when we were in Edinburgh, and Edinburgh is a ridiculous place to be around this time of year. If you've not been and have always wanted to I'd strongly urge you to act on that impulse. It is an incredible beast. Since getting back however we have been confronted by some sad times. We've had to move out of our big beautiful shared arts space to make way for Halfords and their bike bits and car parts, which is fine, but still a bit sad and leaves us some what in the lurch in terms of rehearsal space but the kind folks of The Post Port office have offered us a very temporary home and we're working well in their strange but enchanting space.

We've set about the weird task of creating some short play-within-a-play's for our play-already-in-a-play. Idea's that we've had bubbling up for some time now are beginning to take form in what is becoming a sketch based format in which Julius. M. Barker, Bethilda the Bearded Lady and Sangieve the Lobster Mind Reader retell ridiculously titled Ye Olde Victorian Fables. 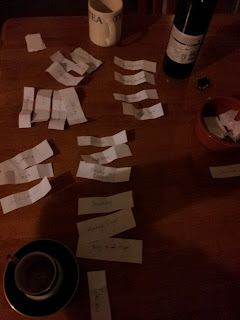 Going back to the devising side of our working processes we took turns writing descriptive words, emotive words, characters, objects and animals then we've pulled them out of five bowls and put them together. Like tiny Frankenstein's of words. 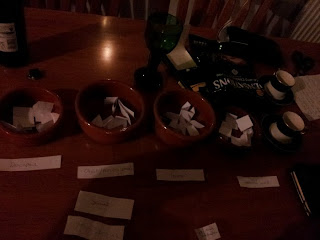 Here are some of the gems:

The Insanely Mischievous Windy Bob By the Brooke.

The Tale of Cpt Grey Sack and his Haunted Foreskin.

The Bastard Duke Longlobe and the Tale of the Hairy Turnip.

The Cave of the Big Black and Beautiful Wig.

The Death of Grampy's Thyme Plant.

Here's a pic from todays rehearsal in Post Port of The Tale of Cpt Grey Sack and his Haunted Foreskin. 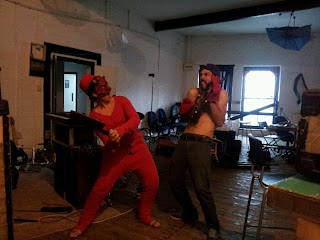 So... Quite a weird selection of fables with a lymric that is too rude to blog about and a few characters such as The Chubby Slightly Left Wing Chimney Sweep and Steve Wonder. We've got a good few days to turn these into extra parts for the show, so should be a goer. Keep you posted.

We're knackered but well happy at the moment. Back from a very successful Ed Fringe gaunt, straight into something new and exiting that feels all comfortable and familiar at the same time. Beautiful.

Ed Fringe Has Made My Eyeball Pop Out

My eyeball has popped out of it's socket. 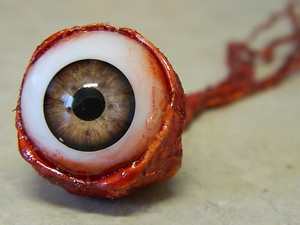 A blood bulge formed in the intricate system of nerves and veins at the back of my eye, which (because of my ever encreasing elevated heart rate) grew and grew to the size of a kumquat. My heart rate was elevated because of all the coffee I been gulping, because although alchohol is often the drink of choice when it comes to suppressing stress, coffee is cheaper, keeps me alert and is warm and comforting, as is a scotch, but lets not go there. And why am I trying to suppress stress? Because I'm in Edinburgh. Why is Edinburgh stressful? Ooooh I don't know. Perhaps it's because I've clocked about 12 hours sleep in total, have been 9 hours in transit, have had to do a get in for a show at 6am, fixed broken stuff with limited tools, solved problems with my soggy mind, communicated, deliberated, waited... and waited, attempted to sell a show that has of yet no publicity (I will not name names), besides which our monster accidentally nearly tore the roof of our van and we all got locked out of our appartment for an entire day.

So... My eyeball has popped out of it's socket.

After all of this we're optimistic. :)

We've all been hit hard, but we're cracking on in high spirits.

Last night we opened the show to an audience of 13, which is incredible considering we have had no publicity, and although it was very, very warm, we did aight.

So this is just one blog of many #EdFringe blogs and we're looking forward to telling all about the ride.