This week we have discovering all things creative with little nippers from the far flung corners of the welsh valleys, Heolldu and Ferndale Comprehensive to be exact. Our task was as part of our continuation of work with First Campus have asked us to help deliver a project headed by the Hay Festival entitled The Scribblers tour. 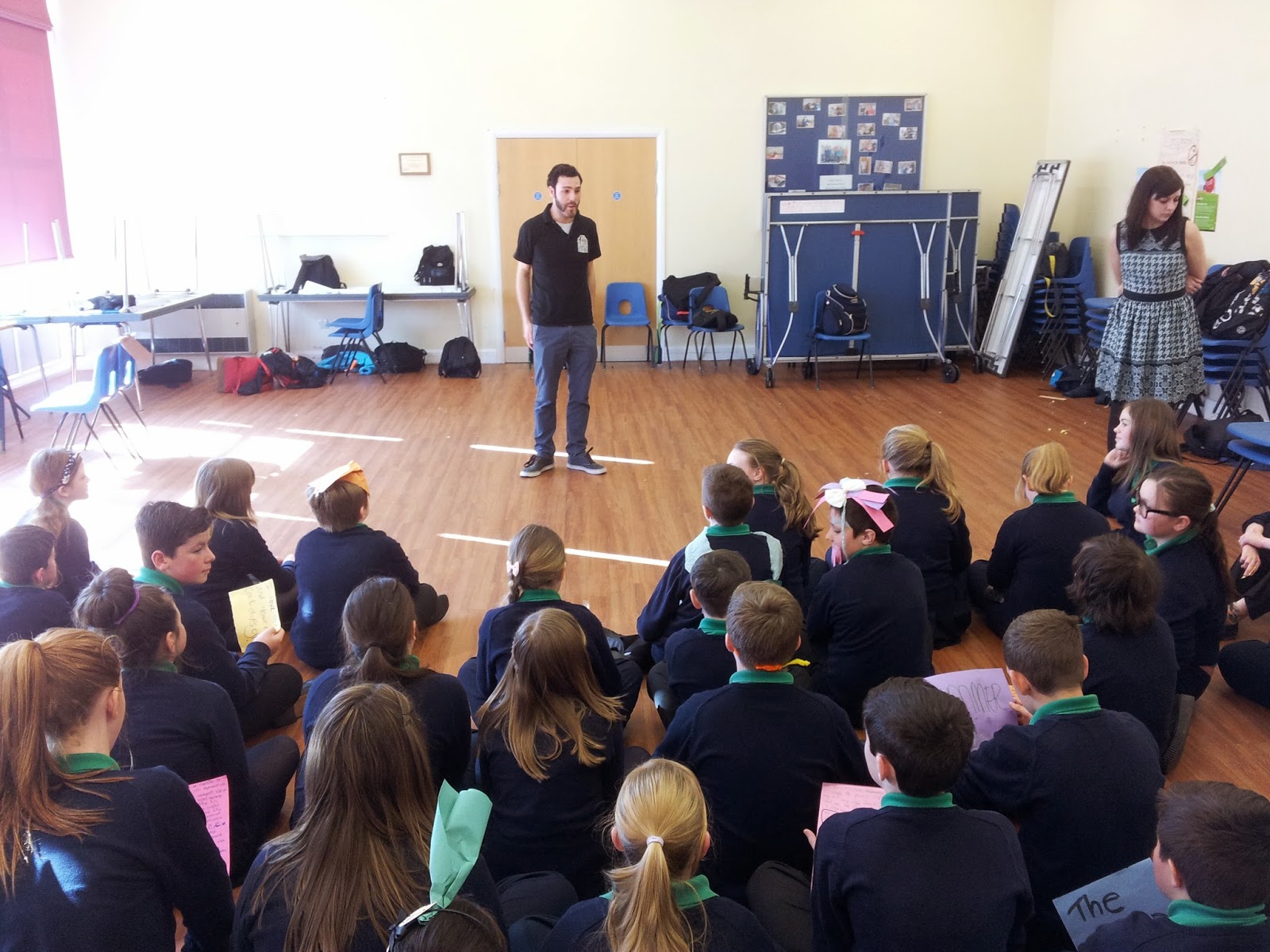 As in previous years we have delivered workshops and performances across South Wales to encourage the youth of today to pick up the dusty old leaves of a book and get stuck in. This year our approach has been slightly different. We evaluated past projects with First Campus (over many a cappuccino) and came to the conclusion that we needed to broaden the contact with the young people that attend the day of performance and visits from authors at the university, and one day simply wasn't enough, we needed to plant the seed, wait for it to grow, admire the flower and then continue to water and nurture it to keep it alive (think of that as a seriously naff or particularly beautiful analogy). 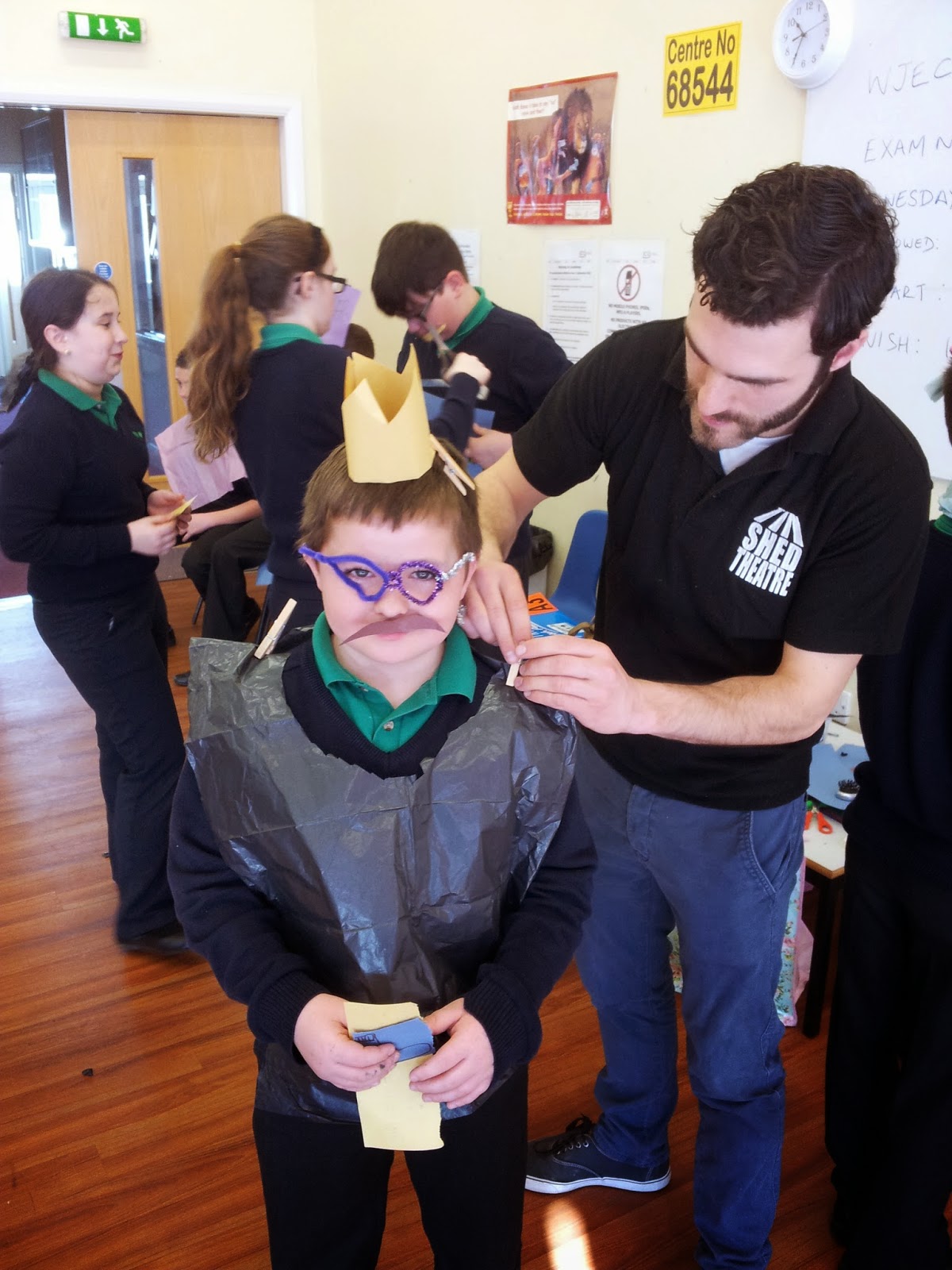 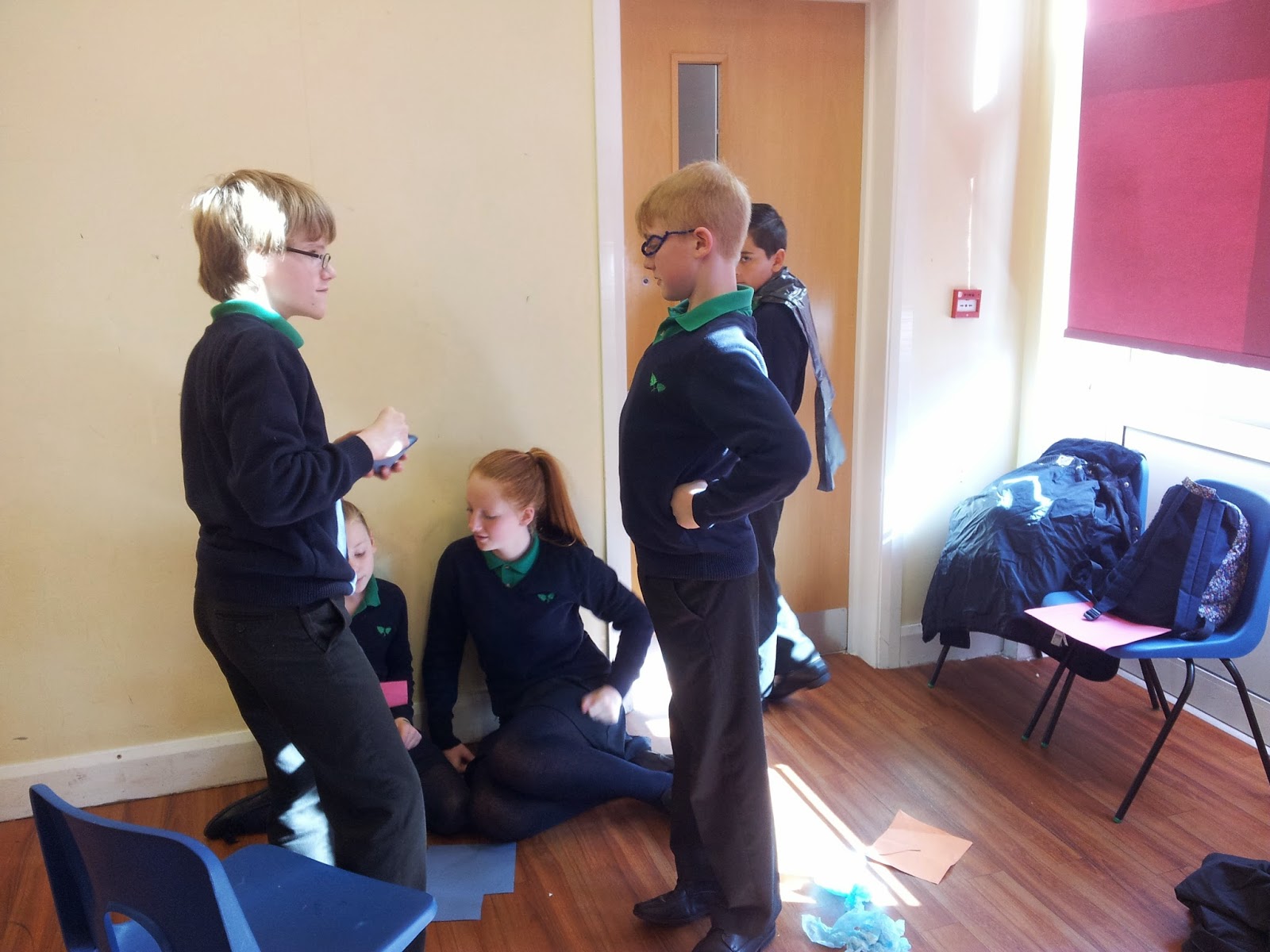 We wanted the young people attending the Scribblers Festival to have a direct impact on the work that we are making for the project. Through their creativity we are hoping they will inspire us to devise a piece of theatre. We therefore hatched a workshop plan that would enable them to create their own stories from scratch. 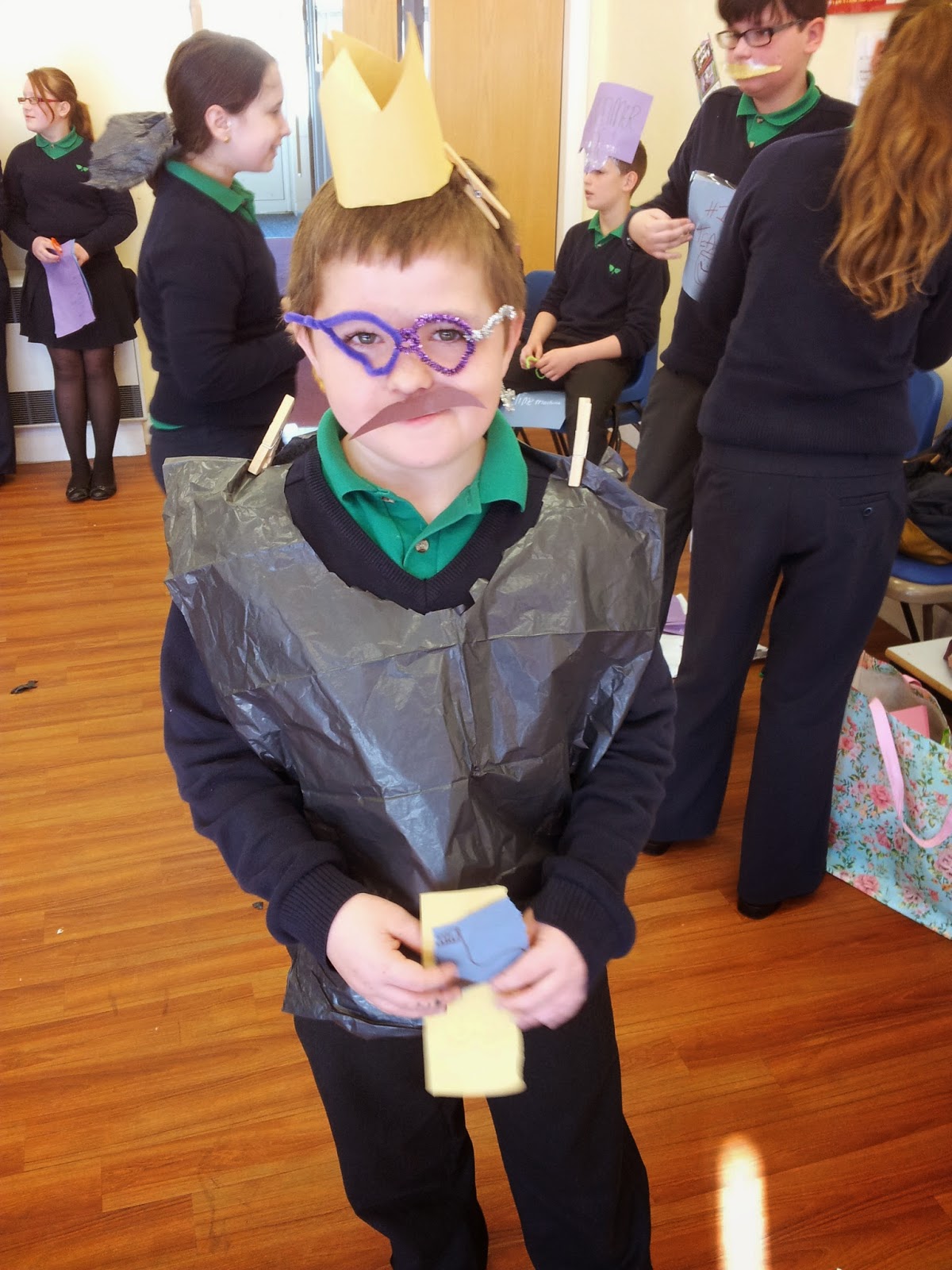 First we introduced the idea of stimulus and how this is often used as an inspirational tool. We then moved on to, what can only be described, as a giant game of consequences. For those of you who don't know how to play, we read out a title, person, object, location, date, time ect. and for each one of these they confer in their groups and write something down, accept every time they have written, they change paper with another group so you end up with a complete mish mash of jumbled words, we then ask them in their groups to create a story. We particularly encouraged them not to use any characters or narratives they were already aware of and to really use their imaginations and to think outside of the box, there are no limitations. The story then must be written down, there must be a narrator, they then devise a way of delivering the piece back to the other groups. Then with some serious crepe paper and pipe cleaner negotiation we not only have some of the oddest stories I have ever heard but some expertly crafted clothing and props. 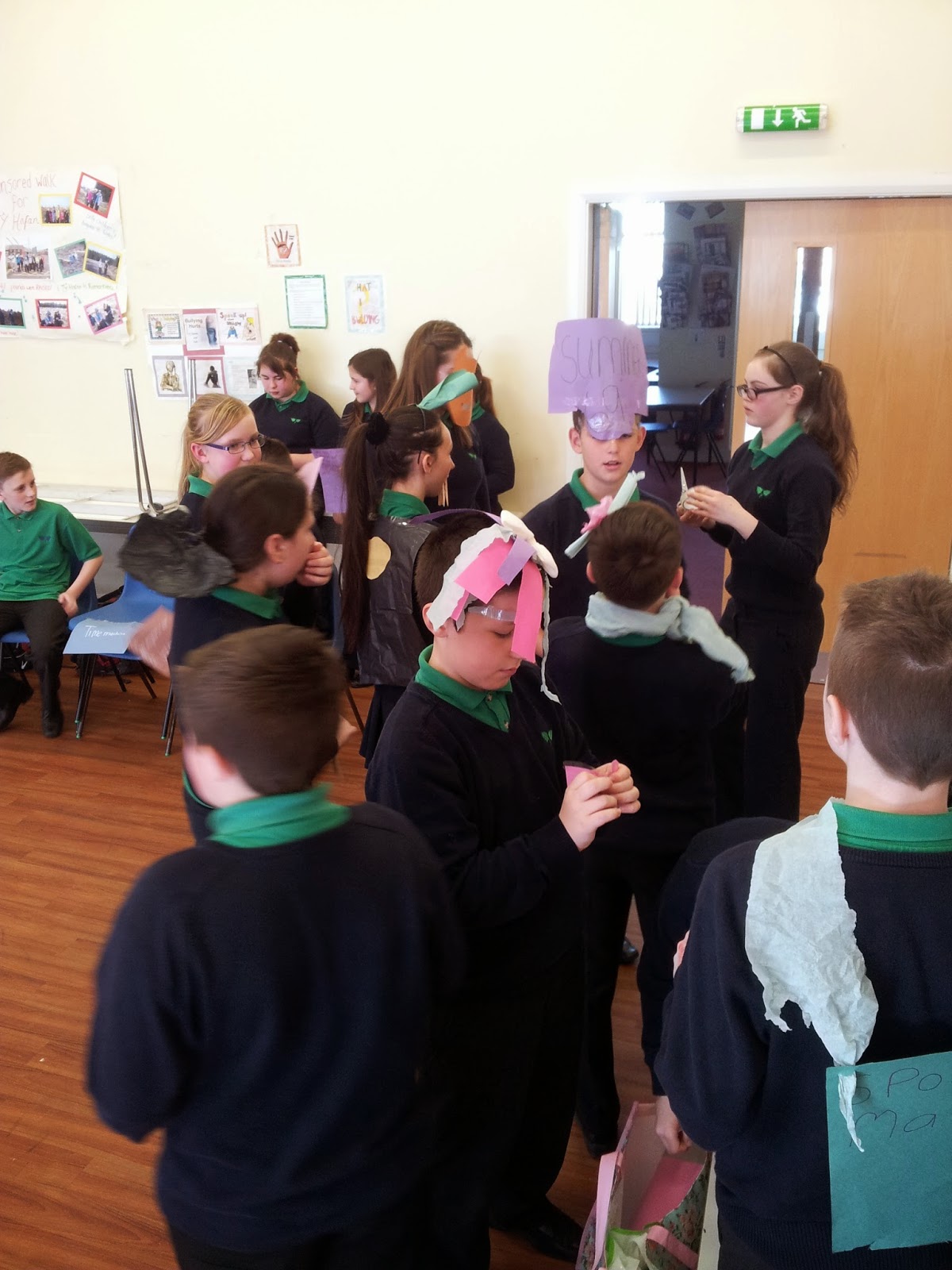 It is increasingly difficult in modern society to encourage children and young people to embrace their inner creativity, especially as we are now bombarded with screens, control panels, mobile this mobile that, we almost forget how to use one of the simple gifts we are so lovingly blessed to have as a child IMAGINATION, and even if we can remember what that is, society almost stamps out the need to ever use it. And I suppose, thats where we come in.

So... The Seed has been sewn. The next step is to take or shiny red suitcase full of stories, into the rehearsal room and make some head or tail out of the madness...

An Educated Start To The Year

Tin Shed Theatre Co. has had a pretty "Educational" start to the year.

Yes we've learnt a lot, as we always do, but that's not what I mean. Our workload has been almost entirely based in Education, and it looks to continue in that vein until May.

Starting off by touring of Mice and Men around Secondary Schools for year 9, 10 & 11 Students studying the text as part of their English Syllabus; Performing, Running Workshops and hosting Q&A's.

Following this we have another tour of an English Text with An Inspector Calls, followed by working closely with First Campus to deliver a host of projects from Raising Aspirations to encouraging Creative Writing in Community 1st Areas and as part of the Hay Festival.

But today was slightly different, today we ran a workshop for Teachers. Specifically Primary School teachers from schools in Newport as part of Catalyst Motivational Teacher Training Days.

I thought I'd take time out of application writing to share the outcome of this with you and just put it out their for anyone else who may find it useful.

Creating Wonderous is an "umbrella" term for an approach we've concocted when looking at studying Cross Curricula Themes Through Drama Creative Engagement.
It takes inspiration from Dorothy Heathcote's Mantle of the Expert (MoE) and some things we picked up from Thrift Music Theatre's INCREDIBLE two day creative learning seminar Make Learning Irresistible. You can read my Blog from two years ago about the two days Antonio and I spent there: http://tinshedtheatre.blogspot.co.uk/2011/03/goodbye-ufton-court-hello-riverfront.html

Creating Wonderous places children/participants into groups where they are encouraged to explore, discover, familiarise and engage with a certain subject matter, then they must collaborate, converse, invent, devise and perform a "Show Back". The "Show Back" seems like the important element but it is not. Creating Wonderous doesn't focus on the techniques of performance, puppetry, film making, animating or any other platform/format, it's focus is on engagement, conversation, self discover and exploration that can be linked to almost any subject matter.

Today our group of Primary School Teachers formed Puppet Theatre Companies and made three short performances about The Amazon Rain Forest. They made some discoveries along the way and learnt some new stuff too. We hope what we did with them was helpful, so much so we've decided to share it with you. 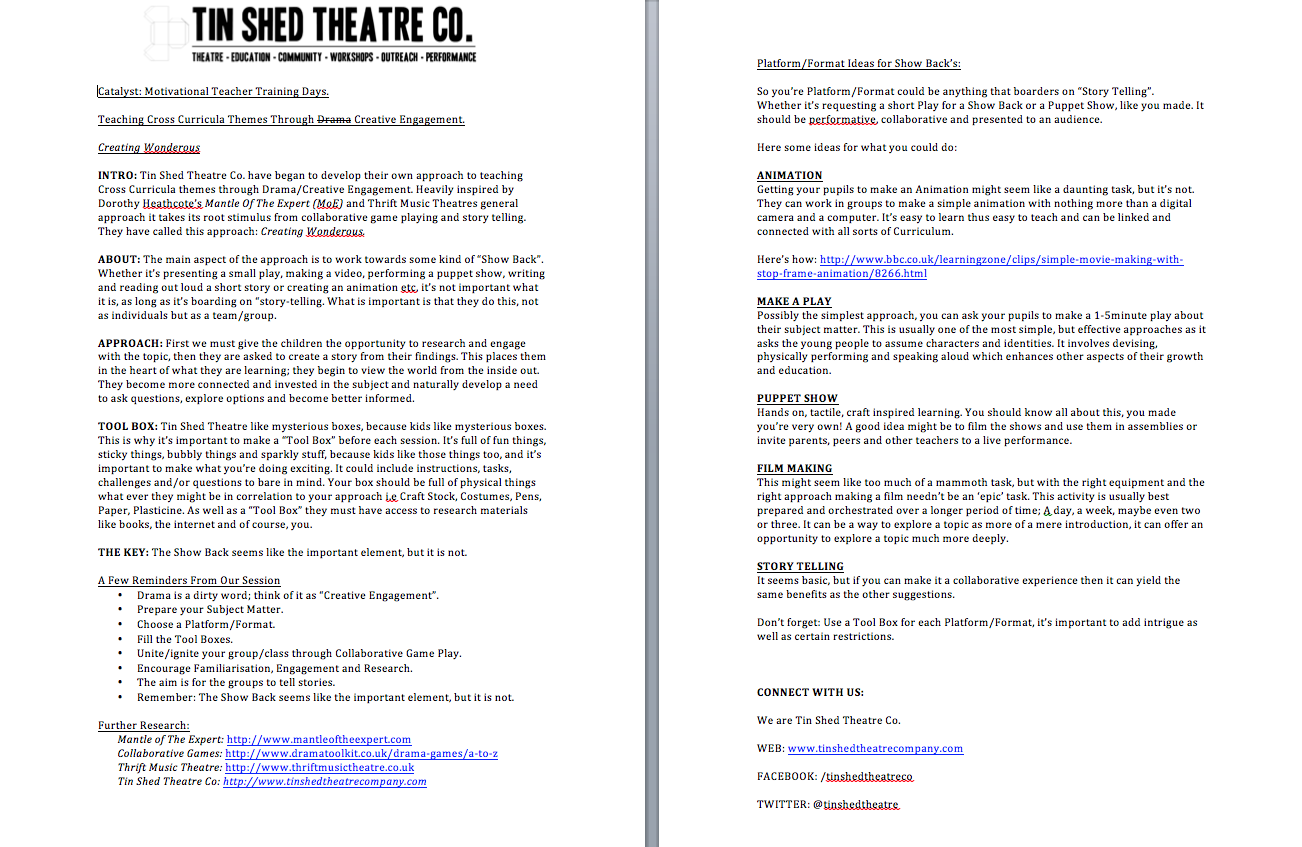 The Beat of more than One Drum.

We've all got different rhythms. We do what equals 'happy', or we do what we have to for the sake of ourselves, our partners, our friends and our families. Whether those things are artistic, practicle, scientific, manual, charitable, chaotic, utilitarian or totally pointless, we, and those things, move to more than the beat of just one drum. 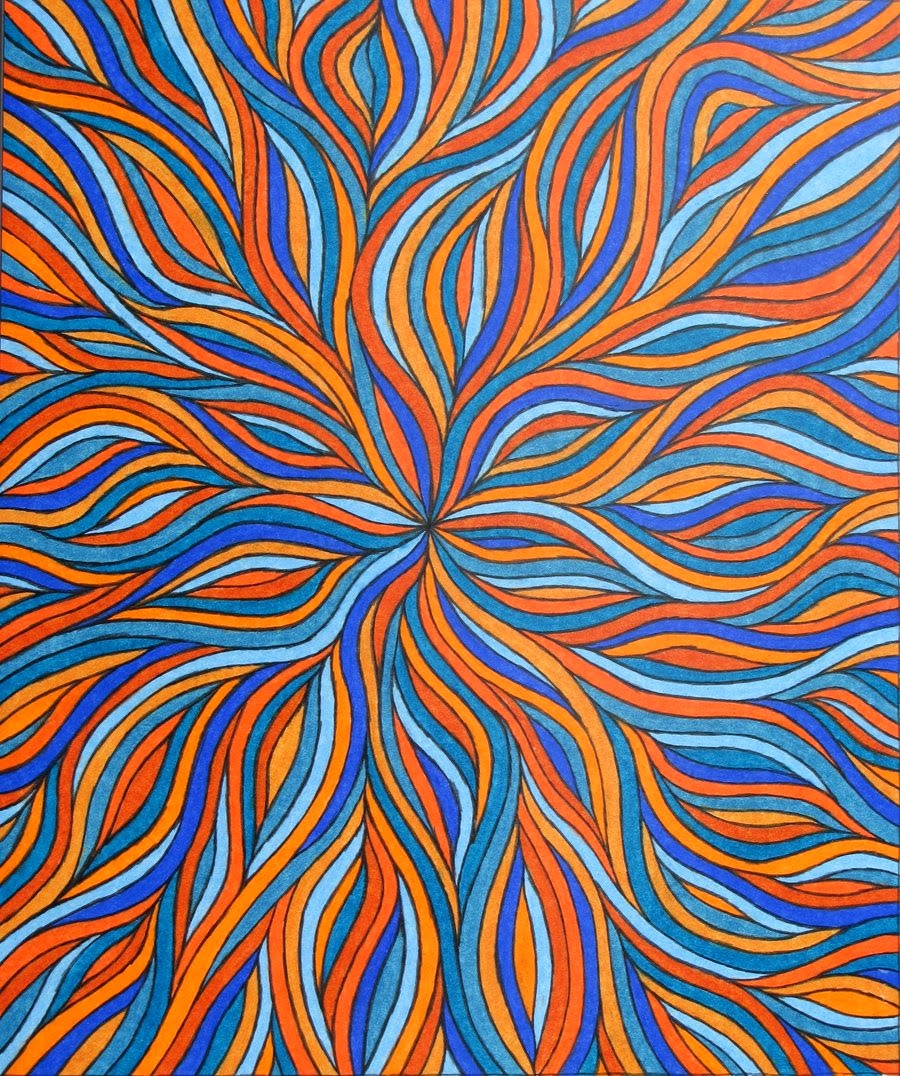 Some of us live in patterns, some in randomness and probably a whole load of other 'sates' in-between. So it seems obvious to me that things can get in the way of that; blind-side us, mess around with our priorities and force us onto an unbeaten track. It's normal and it happens every single day, and some times we deal with it well, and some times we don't, but it's when we get pushed into unknown areas that we excel, preserver, become tactful and capable of new invention. We've been a tad reluctant to leave (be pushed from) our very comfortable, well worn path since we started to get recognised and appreciated them years ago. Not so much hazard of the job, but more like hazard of the life.

That's why I revisited some of Tin Shed Theatre Co's old videos and images and 'other'. The stuff we used to make when we made little to no money, the stuff we made in living rooms and pub attics sometimes outside in the garden because it was the biggest space we could get our hands on, and I'm scared about tripping towards the conclusion that… The work was actually better.

Yesterday we met a whole bunch of live performance makers we'd never met before in the conference room of The Riverfront in a meeting orchestrated by James of Citrus Arts who is leading the direction of this years Opening Performance at the Big Splash Festival at Newport Riverfront.

It was rejuvenating in the purest sense. A short, brief snip of a meeting for us (we had to arrive 40minutes late) we still managed to get to know most of the people and learn about their trade; Circus, Street Performance, Piro/Firework masters and even an Orchestra! It filled me with optimism for not only us as a company who, could perhaps get rid of some stale-ness, but optimism for the city in which we make our work, the beautiful, the quirky, the character, the Newport.

I have no fear that this years Big Splash Festival will be a spectacle to be admired and I whole heartily hope everyone who can get involved, does.

It's free, for me, for you, for whole families, friends, distant cousins, your Aunt Mavis and the man from the Corner Shop. 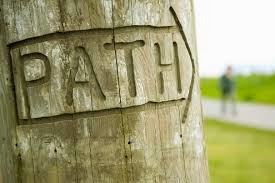 For our contribution, we vow to clamber as far away from the beaten path as possible. Re-touch, re-engage, and re-associate ourselves with us from back then, and find the beat of a long lost drum.

We're all really excited about it.

You can see others involved in the process on the Tweeeter feeds: