Steve Has Left The Building

The second Molecule of the year is over. 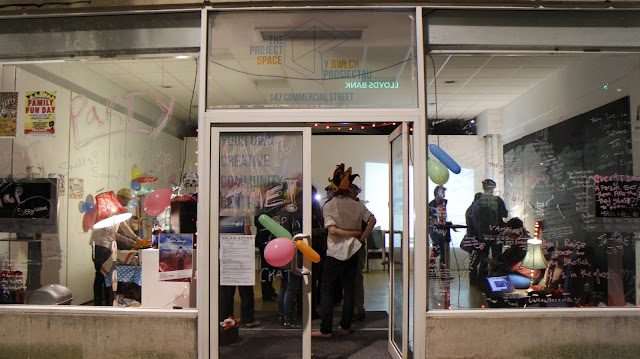 Last night we opened the doors of The Project Space to an audience of around 20 (small but o-so perfectly formed) who had come for some sort of performance show back, and left having shared an experience.

Steve's work doesn't use characters, it's comes at you unrehearsed with a beautiful anarchic honesty. He looks his audience in the eye, opens with "Hi, I'm Steve. I've been in Newport for ten days, and I think I deserve a party" and immediately readjusts our expectation of the event and removes the veil between "audience" and "performer".

People wrote engaged with Steve. Walking off the street into the gallery space of The Project Space they were invited to sit down, have a cup of tea and talk about dead people. There thoughts were logged in someway, and they were invited to write them on post it notes, luggage tags and windows.

At the end of the night, when it had all culminated quite wonderfully, G and I were extremely happy with the way the second Molecule of the year turned out. We just hope Steve found it a fruitful worthwhile experience. After Dino's fantastic development in February we're very happy to add Stephen Donnelly to our list of "Molecule" users, and we hope that both these productions find a life after Newport.

Thank you to anyone who attended last nights sharing and supported both Steve and us. We partied hard, played games, competed in a sibling type olympics and even walked the cold hard streets of Newport. 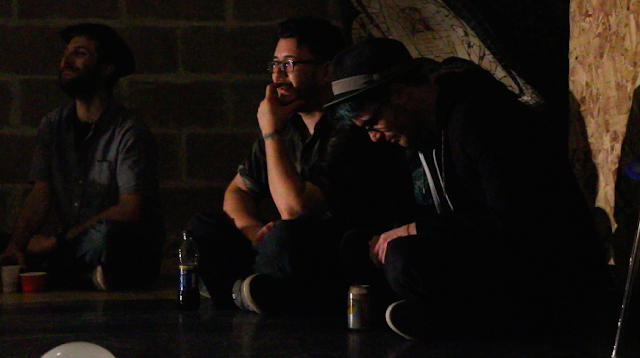 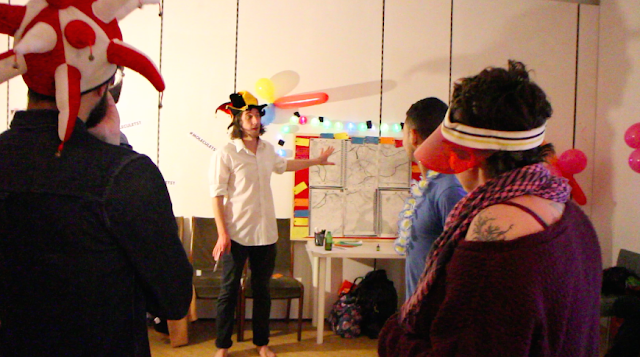 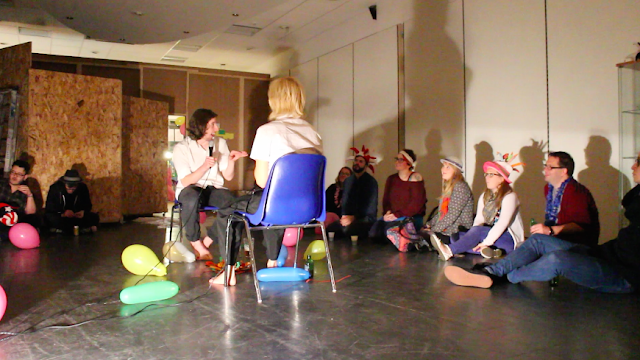 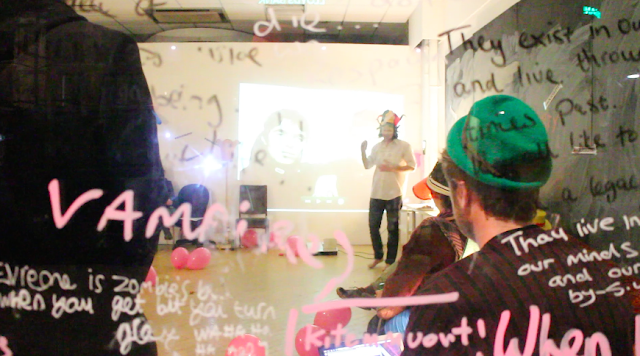 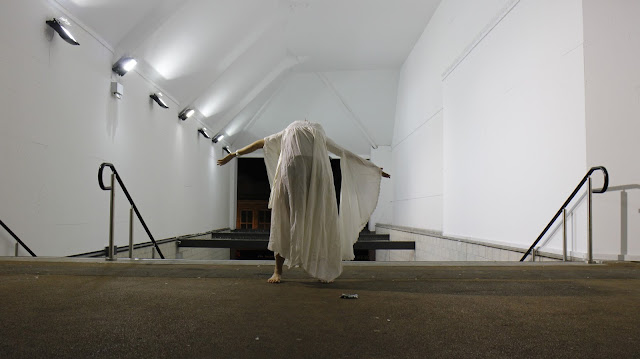 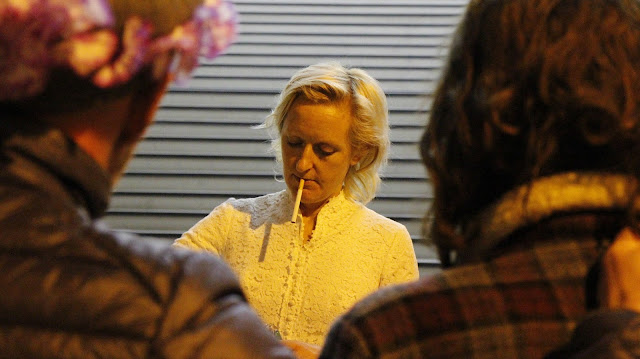 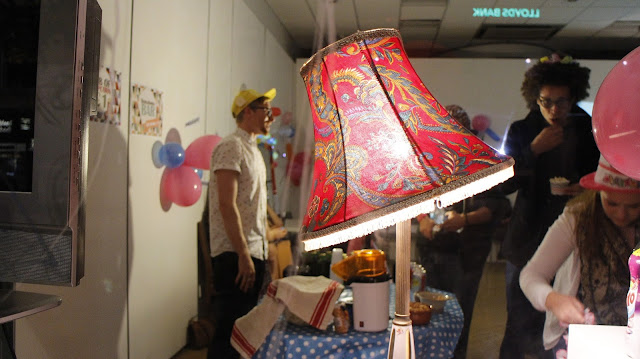 A thank you to:

Everyone who attended last night.

Anyone who shared or retweeted our posts.

The guys at The Project Space.

Most importantly of all, a huge thank you to Steve for sharing his very personal work with us. It was an absolute pleasure to spend ten days in your company.

Tin Shed Theatre Co. has always been fully accepting of any individual no matter their age, race, gender or religion.

So this is something we feel very strongly about.

With everything that is happening with British politics at the moment, I thought I should bring this new organisation into the lime light, so we can all have a voice to make change.

PAZO is an organisation that hopes to make that change. 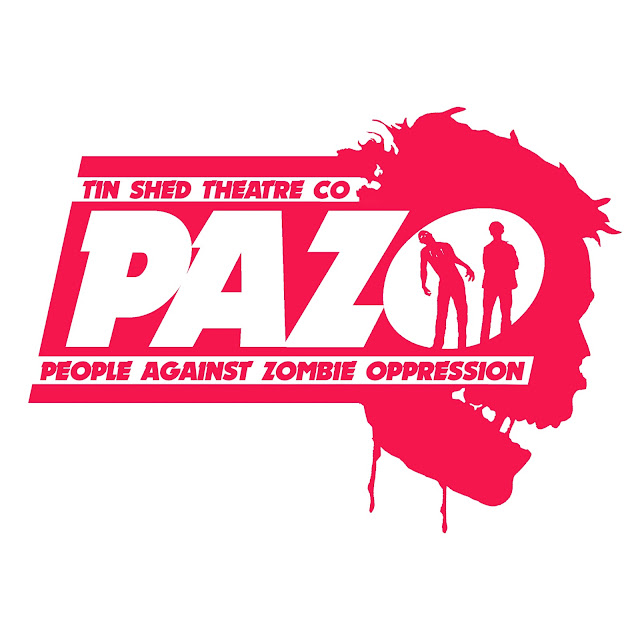 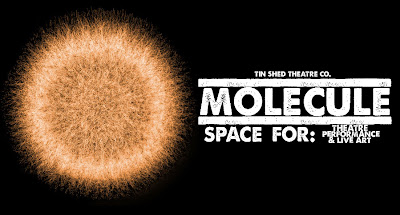 - Firstly we here in the shed would like to thank everyone who took the time to apply for Molecule, your interest in the project is reward to us, and we hope the individual feedback we gave to all applicants is helpful in some way shape or form, but your application will always stand as an introduction, and we'd love to get to know some of you more.

- Secondly I'd like to thank the newly formed Molecule Panel; Tahnee Craven, Paul Jenkins, Christina Handke and Fez Miah. We sat and read and stewed and guessed and talked for hours, and it is very much appreciated.

- Thirdly thank you to everyone who came to support Dino in "Molecule - The Winter Cell" earlier in February. It was such an amazing turn out which offered him some valuable feedback. He's now going on to produce the piece and hopefully tour it very soon.

- Fourthly we need your help. Details below.

Well his name is Stephen Donnelly, and his proposed project is called How Do The Dead Live?

We love the concept and are so excited about working with him on it's early development.

Here's all about him and it: 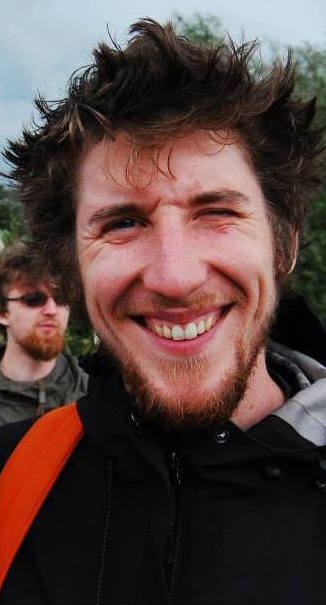 I am a Swansea­based performer and theatre maker creating work that encourages audiences to perform, explore and experience their surroundings in unexpected ways. My work has been shown in the cities of Swansea, Cardiff, Bristol, Leeds and Manchester and has been hosted at Wales Millennium Centre, Chapter, Bristol Old Vic, Forest Fringe Edinburgh and London’s Southbank Centre.

My work regularly uses site­ responsive performance in urban environments, direct address, autobiography, games and audience participation. I use humour and honesty to re­examine the relationships between the personal and the social, inviting the audience to re­imagine their surroundings and encourage social and personal criticism.

These are things I try to do myself day­to­day.
I like to animate audiences, encourage them to experience their surroundings in new ways. This usually involves introducing games, play and new narratives into spaces, giving audiences permission to re­imagine their relationship with the spaces they inhabit everyday.

The best results for me are when audiences start to challenge me to new ways of thinking, actions and possibilities. I like being as honest with audiences as possible as it prevents me, or them, from hiding. 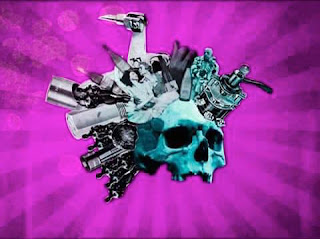 The Project
How Do The Dead Live?

"The question I will ask myself and others through Molecule is: ‘How, and Where, do the Dead Live?’'

I personally don't think there is ‘another side’, a place where the dead sit in the clouds being pestered by Derrick Okora. I don’t think they spend eternity knocking about graveyards either. They are lost, but there are ways in which we find the spirits and energies of the ones we miss amongst the nooks and crannies of everyday life; in the gaps between teeth, the memorized lines of favourite films and songs and in the sound of a spoons scraping the last dribbles of strawberry sundaes out of their glasses. The Dead live through us, in our memories and through our senses."

I want to use Molecule to develop a new participatory theatre piece which broadens the discussion from just my own experiences to include others and offer opportunities for myself, other participants in the devising process and the audience to share and evoke memories of their lost ones.

The whole idea for this project started with my own loss.

My younger brother Paul was diagnosed with a rare form of bone cancer aged 16. Despite several operations and rounds of chemotherapy I lost a best friend, music appreciation compadre and someone to wind-up endlessly with random noises and stupid jokes, in October 2008.

On the first anniversary of Paul’s death, family and friends journeyed to Llangennith beach to pay respects and lay flowers in the waters we surfed as children. It was a stormy day; cold, wet, funny, sad.

Since then our family have continued the annual pilgrimage to Llangennith but last year I realised that, for me, Paul was no longer there; he didn't live down the beach perpetually young, covered in wet caking sand waiting for me to bring him flowers. He never even liked flowers as far as I can remember; he'd probably prefer to be brought Surf and Turf and a pint. It’s a ritual that for me doesn’t do what it used to, it is broken. This map of grief is out of date, it’s routes’ in need of renewal.
A big part of ‘Where the Dead Live’ for me are the spaces of everyday life; That's where I remember Paul and my friend Jay who past away a few years ago.

I want to talk with willing participants about their loved ones in the places they remember them, recording discussions and important routes, tastes and smells. I'd like to use this research to create a fun and surreal guided tour which will incorporate games, direct address and audience participation, inviting people to collectively re-enact and re-enliven the memories. Elements from the tour may be performed or shown pre-recorded as part of the Molecule sharing at Project Space on the 29th.

If you’d like to learn more about the project and would like to be involved I'd love to hear from you, please get in touch with me via email - stepdonn@gmail.com and say hello.

So that's it, and introduction to Steve.

And below are the dates of the show back.

At The Project Space Newport

We're limiting the number of audience to 25 max, so if you are interested in attaneding the show back and sharing your thoughts with Steve...