Reviews: The Good, The Bad & The Really Bloody Ugly 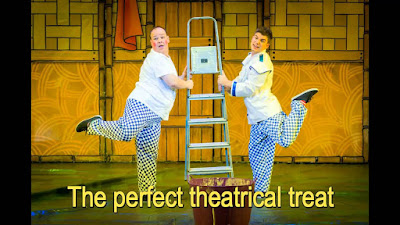 More and more am I becoming agitated by a barrage of "good reviews". I'm talking now from a theatre viewpoint, but I think my disparity exists across multiple platforms.

I remember when I was in Edinburgh performing a solo show and flat sharing with a small independent theatre company to save some monies and make new friends. One night we were all sat around talking about the ruthlessness of Edinburgh. How one day you can be high on it all partying, celebrating and seeing great art, the next day you can be sucking your tears out of the Scottish gutters because you can't afford a bottle of water. Anyone whose been might know what I'm on about.

I was mainly an observer of this conversation, and as it happened the company had equal reason to celebrate and suck tears. They'd had a 5 star review and a 1 star review of the same show on the same day. In fairness the show was not for everybody, but the attitude that presented it's self annoyed me slightly. Of the 5 star review: They agreed whole heartily with each poignant statement and transformed it into some sort of gospel account of their "awe-inspiring" work. It would become the poster quote. Of the 1 star review: They concluded that the reviewer was a stupid twat who didn't know his arse from his elbow let alone his Kierkegaard from his... I dunno... Rumplestein or something. It would become tomorrows chip paper and hopefully never see daylight.

This rang alarm bells for me, and made me question a few things. As theatre makers, is our culture as artists to be so obsessed with the materials of reward that we become blinkered to the possible faults in our own work? By assuming the reviewer we've never met is right and the other is entirely wrong, do we choose to forget objectivity and opinion in search of promotion and inflating our own brittle self esteem? Do we forgo self analysis in pursuit of the comfortability of propping up the belief we've made good work?

Was this us? Without realising it had we become the kind of theatre makers that only shared and celebrated the good, whilst cursing and sticking two fingers up to the bad, based on no other fact other than: they didn't like us as much.

All we can really agree on is that reviews are just a persons opinion, albeit a person who has been trusted with the job of viewing, deconstructing and commenting on something, but still one persons opinion. In actuality they should count for very little, but their power over audiences cannot be denied. A good review can make a show, but more importantly break one.

After retelling this story to George and Antonio (when he was in the company of course) we made a decision: We would share ALL REVIEWS*.

Now, none of this is to say that the bad reviews aren't wrong and the good reviews aren't right, they of course are to someone. I'm also not saying that we should listen to everything and have no opinion or faith in our own work. But by choosing to promote only the four and five starers we assist in the construction of the idea that this one individuals voice is the collectives voice, and it's not. I've seen a one star show that blew me away, and so it goes that the reviewer and I have very different tastes.

So how can we combat this (if you want to)?

By sharing them all we offer a level of honesty and transparency to our work. We offer the public a plethora of opinion and subject matter for them to draw their own conclusions. We don't pull wool over eyes, or negotiate an audience into our seats on our own terms. We offer the good, the bad, and the really bloody ugly, and let people decipher their own truth from that.

As a company, when we share only the good we don't offer the audience the chance to be intrigued by conflicting opinions, we don't open the doors for them to come and view the work and decide for themselves. We bring them in on only the assumption that we're great... No really, we are, Broadway Baby said so. We also begin to support the idea that only "good theatre" (in the eyes of the few) should be seen, we don't listen to our audiences, but the publications.

More importantly we corrupt our integrity as artists. We lose objectivity, and we aren't forced by cause to rethink our rehearsal room decisions. We buy into the ideas supported by the anonymous voices.

The tweets we received last year for three shows we toured offered us more truth and a clearer idea of what people want from theatre than any of the professional reviews we got. We retweeted them all, the good, the bad and the really bloody ugly.

*Doppelgangster
Another company whose activity I've been really interested in lately is Doppelgangster. They shared a startling 1* review of their show Titanic and nothing made me want to see it more. They've further subverted the pedagogy of "reviewing" in the past by reviewing their audience.