APOCALYPSO - THE END IS COMING

THE END IS COMING... 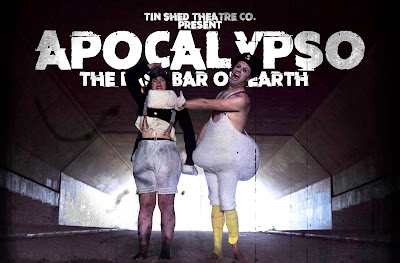 When making a play about the end of the world, it'd be hard to not be too over dramatic... So instead we are embracing that instinct and whacking up to eleven.

This week we properly kick-start our new project Apocalypso. It's been two years in the think-tank, and this June we will be bringing it to life in the Riverfront Basement for five glorious nights.

Here's a lil more about the show:

APOCALYPSO
Set In a dystopian future, a city is in ruins and the sanity of it’s inhabitants is questionable.  A half-chicken-half-man clucks, and his gas-masked companion sieve, shift and lift large chunks of rubble in search of lost relics, packets of M&M’s, and rare objets d’art.Together, this twisted pair run Apocalypso: The Last Bar On Earth where the whiskey tastes like petrol, the toilet bowls give birth, and the party must never end. The bar is stocked, the end is nigh, and soon they’ll meet the man who caused it all. 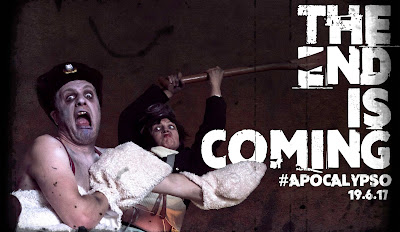 Blending cult and contemporary iconography with the spews of their imagination blending it with explosions and pickings from modern politics, Tin Shed Theatre Co.  create their own bleak vision of the future and use their usual macabre humour to question the decisions of  today: think Mad Max surgically spliced with Waiting For Godot. If you are looking for a night out that spurs deep conversation and bellyaching laughter then this is the show for you! 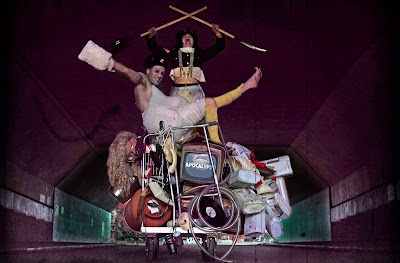 A few years ago now I fell asleep on the bus and dreamt of this odd giant chicken man and his gas-masked companion. They were in an abyss of dirt and relics of an ancient time, only it was our time now, but not as we see it. It was grimy, and dark, and morose and as soon as I was jolted awake, I took out my note pad and drew a picture. Later on that night I wrote a short story based on this snippet of a dream (you read it here). Looking at that original picture, and seeing what we've started to create I'm absolutely in awe of it all. Not because of the experience of having a dream (literally a dream) breathed to life, but having the unfaltering support and willingness of Georgina to indulge in concept. It's a testament to our relationship and our work that we can support one another like this, and very soon after sharing the initial provocation it became "our idea". Now as Tin Shed Theatre Co. we return to our ultimate form to create a mad-ass dark clown art experience that will make you both revolt and rejoice. 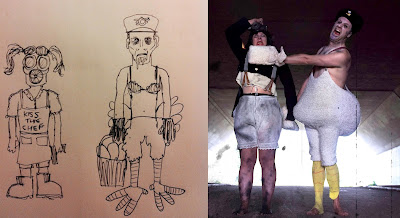 The end is coming, and we're only getting started.