I have arrived in Italy, for a week out of all things Tin Shed. Unfortunately its not a holiday, I am here purely for work purposes!

For the 3rd year I am embarking on a weeks worth of attempting to teach Italian children English via the means of drama, an interesting concept but it seems to work. At this moment in time I am relatively calm and relaxed, I can certainly say that this time next week after 8 hrs teaching a day and when I am supposed to be putting on a production with 120 Italian children I will be some what distraught and possibly ready to give up on life itself! But until then I shall enjoy these moments of calm and tranquility.

Yesterday, I finally thought I should record my own personal greeting message on my mobile answer machine. Not too difficult I thought, no planning involved, get the facts out, done. I was wrong! How difficult can it be to just say 'Hi, yeah, this is me, Im not here 'obviously', leave a message' I must have recorded, listened back, deleted, re-recorded about 5 or 6 times. And if you wanna laugh, call my phone and listen to it.

Thats all for now.

And until something interesting happens......
No comments:

So we've got you jumping about, back and forth, from Facebook to Blogger to www.tinshedtheatrecompany.com to Twitter to your emails (from time to time) but not no more!

It'll all be under one roof. One great big, glorious, digital, fictional, corrugated tin roof... The time has come!

RISE UP AND CELEBRATE! LETS TAKE THIS CITY OVER!

The future is now my friends. Join us.


Before I leave... More Love Night. 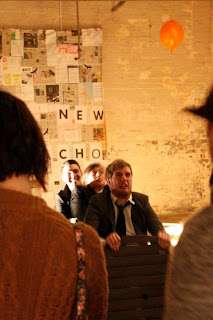 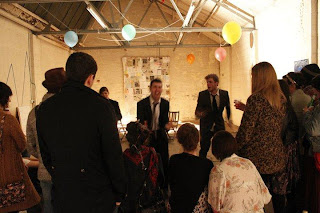 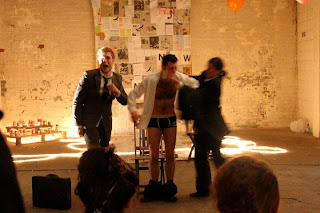 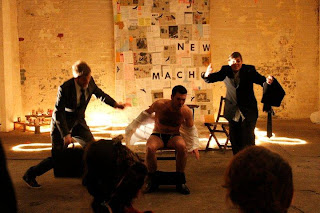 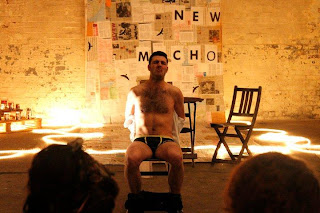 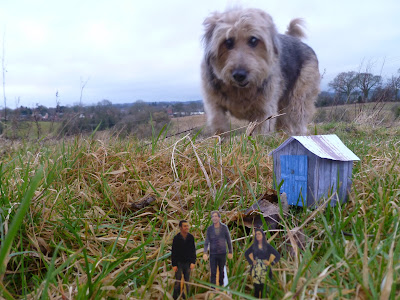 
On Saturday we headed down to Coventry to perform at New Macho's Love Night, hosted by NewMacho and held in Studio Four.

The concept of Studio Four is awesome. It's a large empty open space (just like a massive garage really), that offers artists of all different creeds a months residency inside it's concrete walls. Humble and modest the room is large but sparse and has only a couple of power plugs dotted around and a toilet in the corner.
Love Night was one of New Macho's two artistic ventures. They will be performing in there again come March time, so keep a look out for that. Love Night was about New Macho casting a slightly wider net and allowing theatre makers they know to perform in the space and reap it's benefit's. We performed For Sale, a ten minute performance that explored how we sell ourselves, for love or money, gratitude or growth, a relationship or an opportunity.

Fargo's Studio For has seen a mixture of artists working inside it so far, and I'm sure there is more to come. Talking Birds have worked within these walls, and it seems to be latching on to a popular trend, art in unusual places.

Check out some more at http://fargospace.posterous.com/
No comments:

Yeah yeah yeah! here i finally am. The 3rd member of Tin Shed. the Italian one. Ciao bellisimi! Sorry I've taken this long guys, but you know me and technology! We always take longer to connect with each other. Plus... i kind of like being the dark horse and mystery man of the company. It gives the Shed more flavour. Makes our fans more excited to meet me and hear me for the first time in performance rather than in person. wink wink! its all about building up towards the surprise when you've got a foreign member in the company. I'm like a rare treat for people who read our blogs. Well I thought i'd just reflect on what was quite a bizarre, but typical weekend venture for Tin Shed when we decided to travel all the way to coventry to perform some strange little comedy piece in an empty warehouse. It was strange enough that there were loads of balloons hanging down from the ceiling and lit candles were scattered all around the floor, but what was even stranger was that we took the theme of the event which was 'Love' and some how managed to translate that through cross dressing, flamenco dancing and a pervert asking for his sexual fix through a glory hole in the cubicle of a restaurent toilet. But hey, thats Tin Shed and people loved it. But no seriously, it did have some creative thought behind it... was kind of exploring... peoples.. umm.. first date demons. Yeah, It certainly did do that. yeah, but also. Also! another way of looking at it is that if people LOVED it then i guess we did kind of stick to the theme of love! see! Any other Tin shedder want to share a little more background on this weekends experience? I've been Antonio. ciao buona notte.
No comments:

Love is in the air.

"If music be the food of love, play on;
Give me excess of it, that, surfeiting,
The appetite may sicken, and so die."

Shakespeare
Thought I would start my blog off with a little Valentines themed quote. Im currently sat in my room, in Newport looking out onto a very sunny afternoon. But don't be fooled, its bloomin frezzing outside! I have just popped to Sainsbury's winter clad only to see various male species frantically running around said supermarket grabbing cards and withered carnations in the hope that by the time their better half gets home from work she'll never know he forgot to get her anything!
I have just noticed that my tabby cat Lilly (Who is a b**ch 90% of the time) has found comfort in curling up in my open rucksack, yet unpacked from this weekends excursion to North Wales.
This week is yet again fraught with desperate attempts to confirm school bookings for our tour in exactly a month today (she grabs handfuls of her hair and yanks). One day we will might be able to employ an admin assistant, but until we are financially solvent as a threesome, this just isn't possible.
Watch this space, the Italian one is supposed to be blogging any time now (after me and justin giving him an ear full for not doing so), but who knows, he could be the best blogger out of the three once he gets going!
Anyways, not really saying anything constructive or interesting to read so I'll sign off.
Peace and Love x
No comments:

im doing this because justin told me to......

Stew on the hob, mulled wine on the table and tin shed are back together for another brainstorming challenge for a performance in next weekend.
We are still plodding along with endless phone calls in the deperate bid to contact schools for our tour of mice and men.
Bookings are looking good thus far and the tour looks set to be a success, without counting our chickens before they've hatched.
Myself and justin are currently being highly entertained by antonio, the technically inept italian, who is trying to create a twitter account,
May I say a ground breaking moment in the existence of tin shed. He has so far tried 'molio' and 'tony-goat' both of which are taken, much to his amazment,
He really has no idea about twitter!

This week is filled with planning, meetings and workshops until we head up to oswestry on thursday. We had some exciting news on friday from the brighton fringe
Organisers, telling us that we are going to be part of an event, I won't reveal too many details but let's just say its late night, by candle light, with the tales of
Edgar allan poe.

So I think that's about it for now, does anyone read this other than us? I'm not quite sure
But hey its fun to write anyhow.

Over and out.
No comments:

Is it bigger than the car?

Whilst making the almost epic (UK Standard Epic, American No Where F**king Close To Epic) 3 and a half hour drive back to Newport from Brighton, we began to play a game. The game is simple. You think of anything in the World, even anything in out of this world (I thought of a Star at one point) it has to be something tangible, but, really can be anything. One of you thinks of the anything thing and the other people take it in turns to ask you questions (which you can only answer yes or no to) and in doing so get closer to finding out what thing you are thinking of is.

It sounds pretty simple, but we played this game from the routine half way "have a bit of a wee and a wonder around one of the many, many, creepily mysterious service stations in Britain" stop, and it kept us entertained the whole way into Newport. I say it kept us entertain, it was mainly Antonio.

In playing this game Antonio revealed a lesser known part of his personality, a really childish, simple little gimpy Italian boy who loves to play games. He was almost reminiscing in the joy of playing games, the game, like a game he must have played whilst road tripping across Italy and South Wales as a kid, with his brothers and sister all in the back of their Alfa Romeo eating spaghetti and pepperoni (I'm stereotyping a bit). He couldn't stop giggling when we asked him questions and his enthusiasm was like he was snorting cocaine off the parcel shelf when me and George weren't looking.

Although his childish enthusiasm did meet his adult mentally when one of his "Things To Guess" turned out to be "A Jew", and when he asked George "Is it something we need to survive" and George answered "No" he shouted his guess "SALT!" as if that was the only gap he needed to fill. I think George and me got equal enjoyment from his enjoyment of just playing the game. I wish I'd have recorded his giggling.

There is a lesson to be learnt here; we were all kids once. When do we loose that enthusiasm for just playing games and pretending and being silly?! Antonio, in his own special little way may have a few lessons to teach us... Probably not though, one of his answers was "Traffic Cone" and he thought that was about the funny thing he'd ever said.

Anyway enough of that bollocks, as promised, here is pictures of Antonio getting shat on by a crow in Brighton. Enjoy. 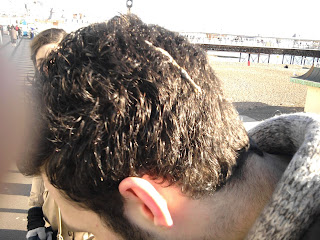 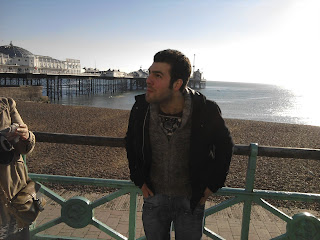 This isn't the moment, this is Antonio looking up and remembering the moment as me and George take humiliating pictures. 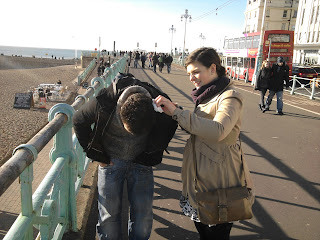 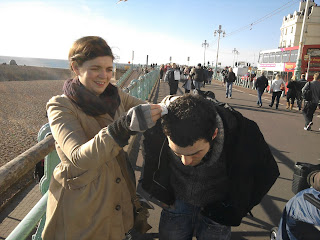 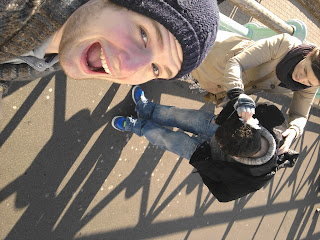 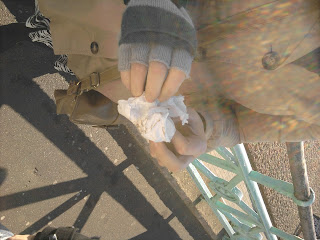 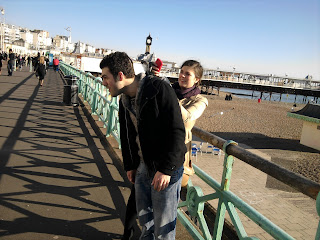 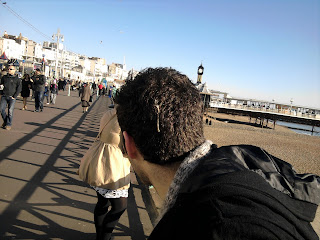 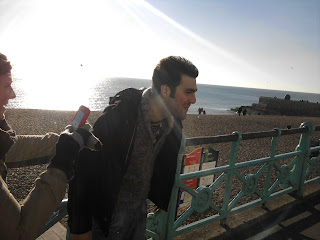 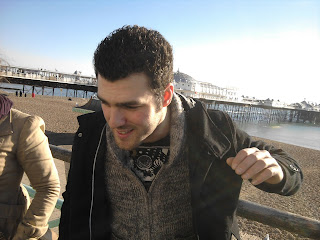 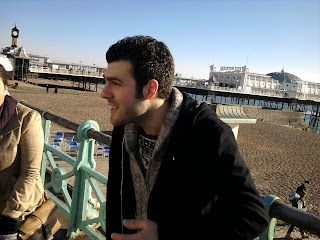 Unfortunately I didn't manage to take a picture of the crow.
Although here is some more Brightony goodness for your perusal. 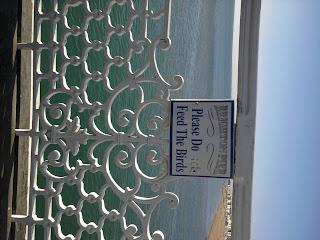 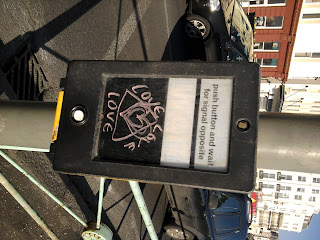 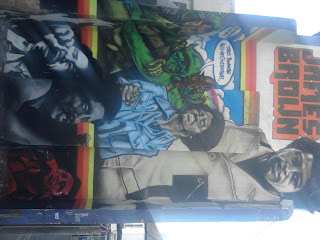 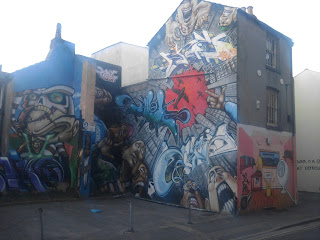 This is an example of how amazing an art form like Graffiti can be when allowed! 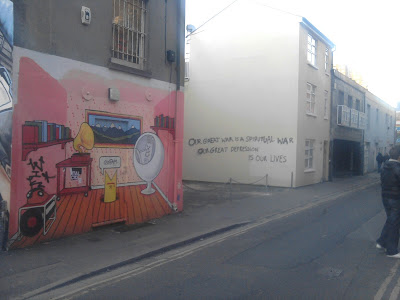 I wish I'd have caught this piece from a better angle as it was one of my favourites. I did however manage to capture the extremely depressing sentence, which is arguably not as good as the other graffiti. Ok I'll admit, that was Gile's joke. 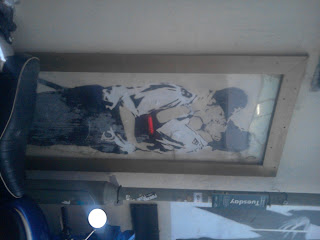